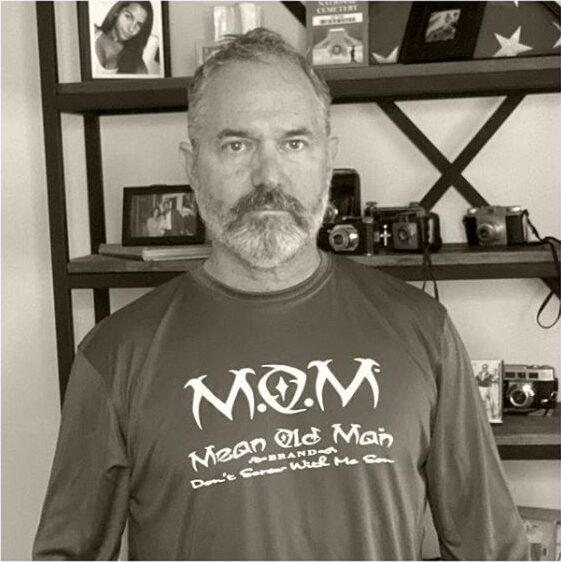 Some folks think he’s a Mean Old Man. He has a circuitous past, and lots of history. When folks say “old school” they’re picturing him. He’s been around, got in a bit of trouble when he was young. Nothing serious. He keeps secrets . . . lots of them.

He likes horses, cars, fishing and women, not always in that order. He would take a bullet for his friends. He holds his liquor, and usually his tongue . . .  to a point. He won’t start anything, but god knows if you push him . . . He’s been heard to say “She’s my daughter. I love her more than life itself. Don’t screw with me son.”

Deep down though, he’s a pretty good guy. He believes in doing what’s right, even when no one’s looking. Realizing that you have more history than future, and you better make the most out of the little time that’s left. He’s the kind of guy you wish was your neighbor. Maybe even your dad. Hell, he might be . . . He’s a real guy who’s lived long enough to have earned a bit of an attitude.

He’s been known to quote one of his best friends when he asks “how many good weekends do you have left?” as he slides away from the dock on a boat for a few hours of fishing in the middle of the work day.

He doesn’t have a lot a patience anymore (never did), and he won’t take a lot of crap. He misses the friends that are gone. He can be a bit cynical. His favorite response to dumb acts or comments is just one word, “Really?” It took him years to get like this. Like his weathered skin, his soul has a patina formed from over six decades of enjoying life. He’s a lot more than a mean old man, but that’s just how he comes across. It’s an attitude, a state of mind. A fine balance. And that’s fine with him . . .

Do you know a real-life Mean Old Man? Celebrate his tenacity, his wisdom, his attitude . . . buy him a drink, listen when he talks.